You can without exaggeration call me an enthusiastic seminar and training camp instructor. In addition to the training camps I continuously hold for in my own club, I try to be as accessible as possible to my contacts and friendly clubs with which we have close cooperation. In 2008, I held my first training sessions at a large camp for the Finnish Taekwondo Federation, and since then I have volunteered as an instructor at the Federation’s activities almost every year. In 2017, the Federation’s biggest event – The Summer Camp, was arranged on Åland Islands, where I was one of the instructors together with many others from the Finnish Taekwondo elite.

My major area of ​​interest in martial arts has always been self-defense. But not the kind you normally learn in a martial arts club, but one based on analysis of the real violence that occurs outside of training activities with genuine intent to harm and/or control another human being. Fairly early in my career, I saw that many martial arts instructors were lacking knowledge of real violence, and that they were building their training activities around familiar drills that they had always practiced but without ever truly understanding why. So I started to research this area. I studied police reports and public court cases and collected all the material on predatorial psychology I could find. I analyzed the dynamics in video footage showing real-life scenarios of violence and I interviewed a total of nine rape victims. Together with my closest training buddies, I began to investigate what could really work and what was ineffective from the techniques we normally trained and taught. I took Bodyguard Training and courses in communication skills. Besides that, I started to “borrow” techniques from other martial arts and attended as many training camps in as many martial arts as I could.

This accumulated knowledge has, over the years, resulted in a system for self-defense training that I call The 3/2 Matrix – Three levels of Two Ways. My system assumes that physical self-defense is the last resort and the worst option to defend oneself with. Before it comes to physical fighting, there are several better and safer alternatives you should try first, such as removing yourself from the violent situation. By far the most important skill to learn is what I call Safe Communication, which is basically all about verbally de-escalating the threat of violence. Should physical self-defense still become necessary, one must be prepared for combat in Three Levels – standing, falling and ground combat. At these three levels you must able to be handled a threat in Two Ways – with Soft Self-defense, and/or Hard Self-defense, according to what the situation requires. Hence the name “The 3/2 Matrix”.

Despite the fact that we live in a society where, in theory, we should not be exposed to violence, it seems that violence is still increasing around us. Especially in certain professions and especially against women. This has led to a demand for training in self-defense and personal safety. Within certain professions you are more exposed than others and when I hold courses for different professional groups, we always focus on the threat picture in their current profession and the industry regulations that apply to them. Over the years, I have worked with youth leaders, teachers, emergency and health workers, the hotel and restaurant industry, and security guards. In addition to our professional role, we are also at risk of being exposed to violence as private individuals. In our country, violence against women is a big problem. I believe that one must dare to lift the cat on the table and face this reality and discuss the statistical facts. – Who is the statistically most common attacker, what is the statistically most common scenario. But also when it comes to the methods according to which we must and are allowed to defend ourselves. As a rule of tumb, as a professional, but also as a civilian as long as the threat does not exceed a certain level, you should stick to what I call Soft Self-defense where the opponent does not get more hurt than necessary. That is grips, takedowns, and locks. If the violence rises above the level that you risk serious injury, or worse, you are allowed to resort to a higher level of defense, what I call Hard Self-defense. Regardless of what some textbook-smart pundits claim, there is no chance for a victim half the attacker’s weight to handle a real aggressive situation with only Soft self-defense if the attacker really wants to hurt the victim. Then you have to resort to tougher measures , and you have the legal right to do so. We have tested, tested and retested this.

I am always a realist when I teach and I want to keep the content practical. I don’t want to teach fancy theories without a practical connection. What I want to achieve, whether teaching Taekwondo technique or practical self-defense, is a sense of “I can” in the participants. That feeling builds self-confidence, which makes you dare to try. Because after all, a lot in our lives depends on whether we trust ourselves and dare. This applies in sports, but especially in self-defense and personal safety. 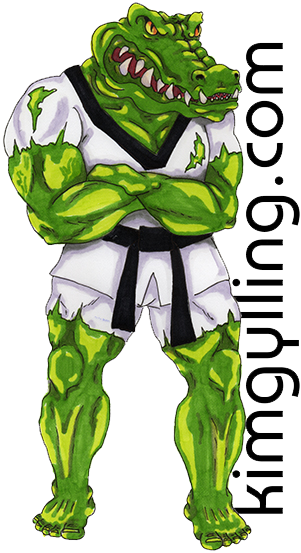